St. Clare of Assisi and St. Agnes of Prague, August 11 and March 2

St. Clare of Assisi is one of the women saints whose spirit has influenced many throughout the world. In August of 2012, I did a blog post on her. In October of 2018, I was fortunate to visit the Basilica di Santa Chiara, Assisi, Italy, where I took a number of pictures. I include a few in this post.

The post of 2012 is biographical with a recipe and a book by a Poor Clare.  I hope you will enjoy them. You  can find the post here: St. Clare

While living in Virginia and working at St. Veronica's Parish in Chantilly, Carol Krieger and I would cut through the hills of Clifton on our way to work. Nestled in that lovely hidden community was St. Clare Catholic Church. The church itself was quite new and had been the brainchild of Fr. Cornelius O'Brien, a diocesan priest from Ireland. He made his way to Virginia and served in the Diocese of Arlington for many years. My husband and I had been fortunate to hear him speak on a couple of occasions. Before he retired back to his native country, he designed and built this lovely church of St. Clare. Carol and I would stop in for morning Mass on our way. Fr. O'Brien was no longer there, but this little gem located among the woodlands of Clifton provided the quiet start to the day we both desired, and it reflected the spirit of the foundress of the Poor Ladies, or as we know them today the Poor Clares.

St. Agnes of Bohemia, January 1211 - March 2, 1282, often referred to as St. Agnes of Prague lived during the time period of St. Clare, 1193 - 1253, and was influenced by her. Like St. Clare, Agnes was of noble rank, in fact she was a princess, the daughter of King Ottokar of Bohemia and Queen Constance. St. Elizabeth of Hungary was her first cousin. I will save the many biographical details of her life for her feast day on March 2 of the coming year.

What I wish to bring out is the spiritual relationship between St. Clare as foundress and abbess of the Poor Clares and St. Agnes. Agnes as a princess was given in an arranged marriage from her earliest years. However, one can only assume that her education first under the watchful eye of her holy aunt, St. Hedwig Andechs in the monastery she had founded in Poland, and later under the Premonstratensians nuns, inspired in Agnes a deep love of the King of Heaven rather than an earthly king. For  this she turned to Pope Gregory IX to assist her in renouncing her arranged marriage to Emperor Frederick II. Agnes had made a vow of virginity in her earlier years after a previously arranged marriage was dissolved. Pope Gregory IX supported her request and Emperor Frederick II accepted her vocation .

When Agnes was about twenty, the Friars Minors of St. Francis visited Prague. They told her of the life of St. Clare and how she embraced the spirituality of St. Francis. Agnes was very much drawn to this Franciscan spirituality of embracing Lady Poverty.  She soon founded a monastery hospital which she named after St. Francis. Shortly after founding the hospital, she built a monastery for the women of the Poor Sisters. Today we know them as Poor Clares. On Pentecost of 1234, Agnes entered the Order and took solemn vows of poverty, chastity, and obedience. Her entrance into contemplative religious life was heralded throughout Europe.

It was during this time that St. Agnes and St. Clare began corresponding. Theirs became a deep and true spiritual friendship based on the love of Jesus Christ and the understanding each had for the other coming from a similar noble background. Here are some quotes from a letter St. Clare sent to St. Agnes encouraging her in her vocation:

There are four letters extant which are in the possession of the Poor Clares in Assisi from  St. Clare to St. Agnes. None remain as far as is known in Prague. Pope John Paul II had this to say at Agnes' canonization in 1989.  "Agnes played a remarkable role”... “in the civil and cultural development of her nation.”  Below is a link which will take you to the Italian letters of St. Clare to St. Agnes of Bohemia/Prague. You can use the Google translator to read them in English if you are interested. There are some other websites that have portions of the letters in English which you may prefer to use. None of the sites including this one says it is secure, so please use at your own discretion.

Letters from Saint Clare of Assisi to Saint Agnes of Bohemia

Here are some other quotes from St. Clare of Assisi taken from a prayer card I found at St. Clare Catholic Church, Clifton, Virginia.

"Love God, serve God; everything is in that."

"Gaze upon Christ. Consider Him. Contemplate Him and desire to imitate Him."

"Love totally Him who gave Himself totally for your love."

"Go forth without fear, for He who created you has made you holy, has always protected you, and loves you..."

"Blessed be You, my God, for having created me."

Posted by Colleen at 5:55 PM No comments: 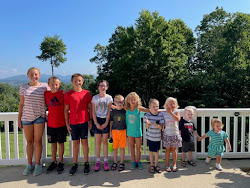